ModSatSim is developed as a «Soft» Channel and Modem Simulator application specific to the UHF SATCOM Waveform. The packets generated by the radios are sent over TCP/IP connections to ModSatSim instead of being delivered to the modem or air. Embedded in ModSatSim are separate modem simulators connected to different radios and a satellite/channel simulator that connects these modem simulators. ModSatSim routes packets from source terminals while taking into account delays, conflicts, frequencies and other physical layer parameters. Errors can intentionally be inserted. Units that do not meet reception requirements do not receive packages or receive them as corrupted. In this way:

The embedded code to be run on the radios are first developed and debugged on PCs in a so-called “emulation environment” which eliminates dependency on hardware and facilitates generation of complex network configurations in a desktop environment. 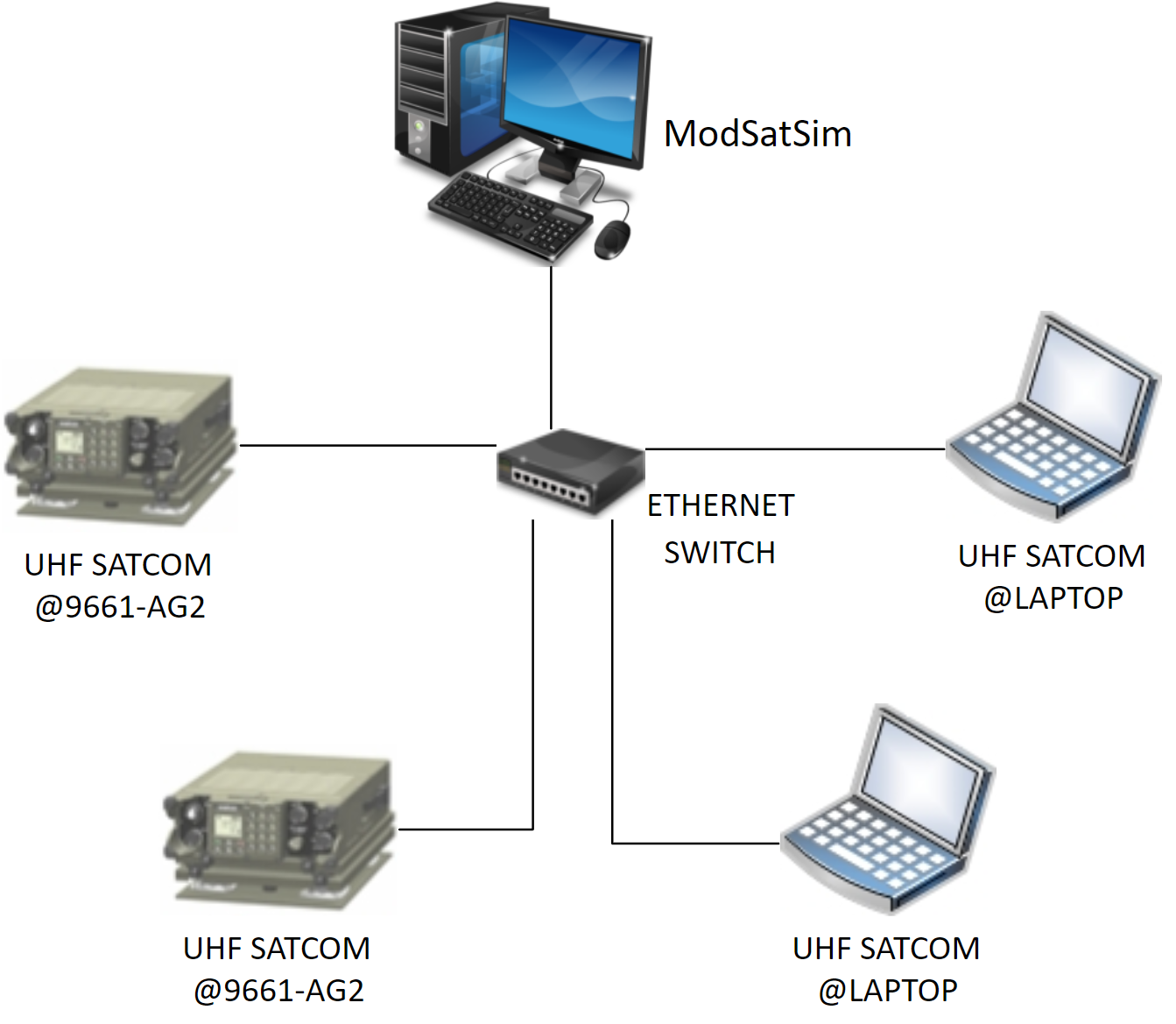 The code running on real radios and the emulation environment are exactly the same except for being compiled by different compilers and having different compiler switches. All communication is routed through ModSatim. PC’s can establish voice or data calls among each other and transfer data.

Radio Interface Simulator has been developed to simulate actions of the radio user and certain messages from other software modules surrounding the waveform software. It facilitates testing and verification stages of the development process.

Radio Interface Simulator can send selected messages both to the embedded software running on radios or to the emulated radios running on computers. The parameters of each message can be set by the user.

Using standard logging libraries with embedded software may interfere with the real-time operation of the software thus may have unpredictable consequences. Commonly preferred methods such as printing the logs to the command window or to a file can make it difficult to follow the logs or filter out the information of interest due to poor user interfaces. The Log Monitoring Software Framework we have developed incorporates many capabilities that facilitate log monitoring and provides means to customize these capabilities depending on the needs of the project. With the Log Monitoring Software Framework, the log stream can be viewed live or the recorded logs can be viewed later. Examined logs can be filtered by the sending unit, a keyword, priority or timestamp. Data that is relevant but is too long to fit in a line can be viewed in a separate data window associated with the log line. Thanks to many configuration options such as different endianness types, connection types (TCP/IP, Serial Port), the Log Monitoring Software Framework is easily reconfigurable and can work with a variety of embedded hardware and software.

In-vehicle infotainment systems become more complex with each new model as computer-assisted driving becomes more ubiquitous. A system’s ability to offer high connectivity, multimedia access and ease of use in driving influence customer decisions in choosing vehicle models. Assessing the impact of software changes made to HMI on user experience is one of the repetitive tasks that slow down the development lifecycle. Integrating the HMI Simulator we have designed into our development environment provides a means to quickly observe the changes made to the HMI in effect. The HMI Simulator also provides the possibility for pixel-wise comparison of screen images or against various rules, thus detecting differences or errors that can escape the human eye.

An average vehicle produced today contains tens of microcontrollers and hundreds of software modules working together to control the vehicle’s functions including driving safety. The cooperation of different microcontrollers fulfilling different functions is made possible via CAN Bus communications. In the development of such a high complexity system, it is essential to divide development tasks and distribute them to different developers working in parallel. The CAN Bus Simulator we have developed simulates the communication of a given software module with other modules and facilitates independent development of modules. It also provides a means to observe and debug software behavior before integration.

We obtained Facility Security Clearance Certificate (FSCC) in 2020 and became an ASELSAN Approved Supplier in 2021.